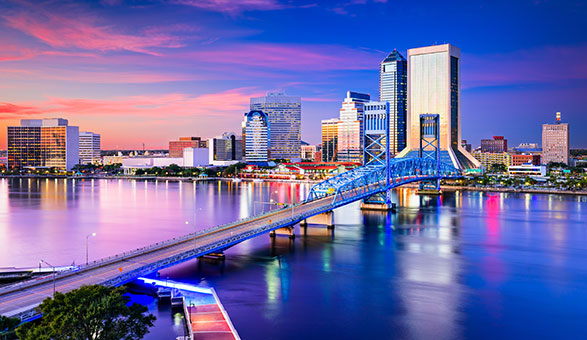 WINTER HAVEN, Florida – December 17, 2020 –  SouthState Bank today announced the addition of a Jacksonville-based Middle Market Banking team, as well as the expansion of its Commercial banking talent across the company’s six-state footprint.

“The SouthState and CenterState Bank merger of equals created a leading regional bank in the Southeast,” said Mark Thompson, president, Southern Banking Group. “Having a team of experienced Middle Market bankers based in Jacksonville, the largest city in Florida and in the Southeastern U.S., enables us to deliver top-tier products and services to meet the unique needs of commercial middle market companies.”

“As the eighth largest bank headquartered in the Southeast, with more than $38 billion in assets and a presence in 10 of the 15 top Southeast growth markets, SouthState continues to attract top talent,” said Greg Lapointe, chief banking officer. “We are incredibly pleased to continue to grow our Commercial Bank through the addition of these bankers, as we expand our capabilities to meet the needs of our growing commercial customer base.”

David Mann is named director of Middle Market banking for the Southern Banking Group, bringing more than 30 years of experience in roles of increasing responsibility at SunTrust Bank. Most recently, Mann served as the national/regional CRE banking executive at SunTrust. He has held executive regional leadership roles and strategic growth roles and has extensive market experience in Florida and the Southeast.

Mike Butler is a 40-year veteran banker who most recently served as managing director of the middle market business in Jacksonville for JP Morgan Chase Bank. He also spent more than 20 years with SunTrust Bank where he was the commercial line of business manager for the state of Florida and also served as the chief credit officer for the Commercial Bank for the state of Florida. In addition, Mike served as the regional executive in East Tennessee for more than eight years.

To serve the needs of the wide variety of commercial customers SouthState supports across Florida, Alabama, Georgia, the Carolinas and Virginia, the bank has added the following Commercial Bank team members:

Dane Brantley, commercial banker – Charlotte, North Carolina, brings nearly a decade of experience in the business banking segment of Wells Fargo to his role of commercial banker. Prior to working for Wells Fargo, Brantley was a credit analyst at Fifth Third Bank.

Tim Duffee, commercial banker – Richmond, Virginia, brings more than two decades of experience in a variety of banking roles, most recently having served as market president in Richmond for First Community Bank. Duffee also served as commercial relationship manager for SunTrust Bank in Richmond. Duffee shares his knowledge with others as an adjunct professor at his alma mater, the University of Richmond, and he is very active in his community, serving in roles focused on education and emerging leaders with the Virginia Bankers Association.

Michelle Gaillard, commercial banker – Anderson, South Carolina, has held positions of increasing responsibility at some of the nation’s leading banking institutions, including Wells Fargo and SunTrust Bank. Most recently, she was a principle relationship manager with Wells Fargo. Gaillard is focused on building relationships and delivering excellent service to her commercial customers, which is what makes her an invaluable asset to their team.

Justin Lake, commercial banker – Savannah, Georgia, has extensive commercial and treasury experience, having held positions in treasury sales at SunTrust Bank, and commercial relationship management and treasury with Cadence Bank. For more than a decade, Lake has delivered customized financial solutions to business clients to maximize their cash flow and working capital needs in order to promote growth.

Charlie Sherrill, commercial market leader – Pensacola, Florida, comes to the role from SunTrust Bank where he was a commercial relationship manager focused on partnering with commercial and industrial (C&I) businesses to provide advisory-based solutions for capital needs and liquidity management. During his time at SunTrust, he supported Small Business Administration clients, as well as capital markets, treasury management and investment banking mergers and acquisitions (M&A). He worked for Hancock Bank for seven years in roles ranging from credit analyst to portfolio manager to commercial banker.

To make things easier, let's start with the basics

This information will automatically be included with your application to help speeds things up. Remember, your address must be located in GA, SC, NC, VA, AL, or FL.